Matopeni – where Boston children centre is situated – is a city slum with a population increasing at a high rate. The area of Matopeni is covering 5 km x 5 km and number of population is about 220,000 people.

The settlement is characterized by poor pit latrines, sub-standard, one-roomed, galvanized iron sheet dwelling with little or no privacy and general despair abound the residents. Children are being worst affected. In this slum there is one public school fully congested with no room for more enrollment. As many kids are left out education system. 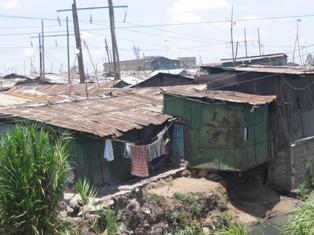 On other hand, many Kenyans, especially in city slums, are characterized by joblessness, great poverty, unexploited talents, improper and imbalanced education, unsupportable health conditions to mention but a few shortcomings.

In most slums in Kenya, Matopeni included, HIV/AIDS is the most urgent danger facing both middle aged and young people (girls and boys), who are most vulnerable and have the highest rates of infection. Especially the economic vulnerability puts pressure on girls to exchange sex for money and makes it difficult for them to negotiate safer sex. One of the worst consequences of HIV/AIDS epidemic is an increase in the number of orphans.

It is common that children drop out of school when their parents die, whether of HIV/AIDS or another cause.

Studies in Matopeni slum shows that – alongside poverty – one of the main causes of school dropout is HIV/AIDS infection within the household.

This reason compelled the Boston Self Help Group to initiate HIV/AIDS programs to take care of orphaned children, HIV positive parents or guardians and to educate the community about HIV/AIDS and its prevention.

The aim is to build a literate, healthy, sustainable, equitable and empowered community. We want to provide young orphans with useful and necessary knowledge and skills – such as primary and secondary education, information technology skills, woodworking and sewing – that will help them to become productive and self-reliant members of the community.

Thousands are constantly hungry, others suffer from deficiency diseases or infections they would be able to resist if they had a better diet and knowledge. Children are worst affected.

With rampant unemployment, many residents cannot have access to health services and healthy foods. They continue to rely on subsistence agriculture.

Over many years expansion of social and economical development has been delayed which lead to increasing savival and unemployment. 60% of the poor residents live below poverty line and work in the quarry breaking big hard rocks into smaller ballast particles to fill a twenty-liter bucket to earn 10 Ksh per bucket.

Therefore we are asking our friends, donors, international funding agencies, churches and all likeminded individuals to came up and initiate social development activities in Matopeni to make this slum a better place to be inhabited by the local community. Lacking of improvement of the academic standards, Matopeni slum children – both orphans and destitutes – will not be able to see their bright future.